14 October 1856: birth of Violet Paget at Château-Saint-Léonard, near Boulogne-sur-Mer (France). She is the daughter of unconventional parents.“Family feeling between them was strong but, at the same time, they seem all to have been rather afraid of one another, or perhaps afraid of getting their own ways. In their letters to one another they were either ingratiating or dictatorial, being extremely polite or else being very rude.” (Irene Cooper Willis, preface, p. x. All my references to Cooper Willis are to her edition of Vernon Lee’s Letters,  London: Privately Printed, 1937.)

“She was quite cynical, disillusioned and emancipated, but she believed in behaving conventionally on the surface if you wanted to go into society which, however, she didn’t. She left England to escape the English Sunday, and went to live in France. Her two husbands bore her and she gave them their liberty after having had a child by each.” VL quoted in Cooper Willis, p. v-vi.

Mr Henry Hippolyte Ferguson Paget: “My grand-father was a teacher in Poland; my father was educated there, in Poland; then he became an engineer. He took part in the construction of the railway between Warsaw and Moscow. He was still horrified by the russian and the prussian persecutions. Together with other Polish people, he emigrated into France in 1849, and even joined the Garde Nationale in Paris…”VL to Berthe Noufflard. Unpublished MSS. 28 July 1934.

“He led a life apart from his family. It used to be said that he always had his meals at the railway station.” Cooper Willis, p. ix.

About her education, VL wrote: “I recognize now that my family is, on one side, acutely [word illegible] & hysterical, & that my earlier years were obdurately calculated, by an alternation of indiscipline & terrorism, by exertion, over work & a [word illegible] solitude, to develop these characteristics.” VL, Unpublished letter to Carlo Placci, 9 Aug. 1894, Biblioteca Maruccelliana, Carteggio Placci.

1868-1870: VL and family spend the winters in Rome (with John Singer Sargent and family) and the summers in Paris.

Violet as a child. Photographs taken from Peter Gunn, p. 21.

“I can remember when the first packet of copied-out airs had arrived from Bologna, and my mother was going to try some of them over the piano for me, I could not remain in the presence… of what, I really do not know; I felt shy of those unknown, longed-for songs, and had to escape into the garden. The first piece she played was Pallido Il Sole, one of the three legendary airs with which the madness of Philip of Spain had been smoothed by virtuous David Farinelli.”

1870: At 14, VL begins collecting material for her Studies of the Eighteenth Century in Italy. Visiting the gardens of the Villa Doria, she “longed to conjure up the shades of its former society.” Cooper Willis, preface, op. cit., p. iv.

Tries to have Capo Serpente published.

1873: the family settle permanently in Italy.

1873: Eugene’s first paralytic symptoms. He was a prostrate invalid through the following 20 years. 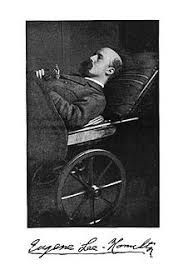 2 October 1874: “On the Fourteenth of this month I shall be eighteen […] I know that writing must be my profession as well as my pleasure. […] I am quite in earnest: literature must be my profession, and the sooner I begin, the better–so at least it seems to me.” Letter to Mrs Jenkins, in Letters, op. cit., p. 40-41.

6 April 1875: “The name I have chosen as containing part of my brother’s and my father’s and my own initials is H.P. Vernon-Lee. It has the advantage of leaving it undecided whether the writer be a man or a woman.” Letter to Mrs Jenkins, in Letters, op. cit., p. 49.

1880: publication (anonymously) of Tuscan Fairy Tales, Taken from the Mouth of the People.

1880: Publication of Studies of the Eighteenth Century in Italy. Her masterpiece. Immediate success.

1883: The Prince of the Hundred Soups: A Puppet-Show in Narrative.

June 1881: VL’s portrait done by her great friend John Singer Sargent: “[John] came the day before yesterday to do my likeness; about three hours’ sitting […]; I enjoyed it very much; John talking the whole time & strumming the piano between whiles. I like him. The sketch is, by everyone’s admission, extraordinarily clever & characteristic; it is of course mere dabs & blurs & considerably caricatured, but certainly more like me than I expected anything could–rather fierce & cantankerous.” Letter to her “dearest Mamma”, 25 June 1881, in Cooper Willis (ed.) Letters, op. cit., p. 65.

18 July 1881: meets Walter Pater: “He is a heavy, shy, dull-looking brown moustachioed creature over forty, much like Velasquez’ Philip IV, lymphatic, dull, humourless. I sat next him at supper & then he sat by me all the evening. Of all the people I have met in England he is the one who has been most civil to me. […] He is heavy but, to my surprise quite unaffected.” Letter to “my dearest Mamma”, in Letters, op. cit., p. 78-9.

1886: Baldwin: being Dialogues on Views and Aspirations.

24 July 1887: meets Clementina (Kit) Anstruther-Thomson: “My hostess has gone to the station to fetch another woman coming here for Sunday, a Miss Anstruther-Thomson, a semi-painter, semi-sculptor, handsome creature, who is, or was, a great friend of Mrs Callander’s, & with whom I am expected to make great friends.” Letter to “Mamma”, dated from Effingham, Surrey, in Letters, op. cit., p. 260.

From now on, VL will be attracted to Scotland, especially to St Andrews (“The handsome Miss A T lives 10 miles beyond”). Letters, op. cit., p. 261.

25 August 1887: VL’s mysterious breakdown at Kit’s house: “my plans are shattered, scattered for the moment by a rather astonishing occurrence, owing to which I may be wanted to stay on in England for another few days. […] I am sorry to have to be so mysterious […] Please tell no one, except Eugene […] of any upsetting of my plans. /The business which thus sets everything per aria, although it has nothing ostensibly to do with me—other folks’ business altogether–touches me in a way, I mean causes me some faint trouble—in fact has given me rather a shock./ I cannot say how grateful I am to circumstances that this complication should find me in this house rather than in any other.”  Letter to “Mamma”, in Letters, op. cit., p. 271.

The mystery is explained a few days later (30 August 1887): “Last week I received half a sheet of notepaper from Mary [Robinson] telling me she has engaged herself to marry James Darmsteter […]” Letter to “Mamma”, in Letters, op. cit., p. 272.

Personal photographs. Courtesy of the current owners of Il Palmerino.

November 1888-late January 1889: VL travels to Tangier with Kit (via Spain, Gibraltar, then back via Malaga, Granada, Cadiz, Naples, Pompei); the two friends depressed and sick.

4 July 1893: Meets G. B. Shaw : “ a young socialist, who despite (I think) his socialism, is one of the most really brilliant writers & thinkers we have, paradoxical (sic) wrongheaded & perhaps a little caddish, but original.” Letter to “Mamma”, in Letters, op. cit., p. 349.

20 August 1893: VL lectures in Cambridge: “the audience […] were not at all university people, but a sort of vast intellectual pilgrimage called University Extension meeting, which come together here & at Oxford every summer for a sort of fortnight’s debauch of lectures on every imaginable subject.” Letter to “Mamma”, in Letters, op. cit., p. 359.

31 August 1893: “I don’t think it is my obscurity which prevents my being popular, but my habit & determination to write only to please myself, irrespective of readers […] At thirty-seven I have no public, but […] I think it better to restrict my expenditure than to increase my income. […] I feel every day more & more that I don’t know enough of life to write a novel I should care to read. Life is too serious to be misrepresented as in Miss Brown.  … At sixty I will write a novel. So I am bound to be unpopular, & you must just put up with it. And so must Mamma.” Letter to Eugene, in Letters, op. cit., pp. 364-65.

November 1894: death of her father. She writes to Carlo Placci: “I used to like to hear him talk about how animals lived & plants grew & clouds & water moved: he seemed to know it all intimately, with the very simple, austere character of a real sportsman & a naturalist. I am so glad he had that bit of romance & adventure too, of the Polish & Hungarian revolutions…” She is disappointed by the lack of outward sign of grief in her mother’s attitude: “she let Eugene & me take her drives, read to E. regularly & yesterday began to read Taine’s Ancien Régime quite hard to herself. ‘It is so touching & so splendid!’ What a beautiful & blessed thing is this old fashioned English tenue!” Unpublished letter to Carlo Placci , Biblioteca Marucelliana, Carteggio Placci.

She secretly cremates her father, complying with his wishes; her mother will remain convinced that he is buried in the family’s grave.

1894: Althea: a Second Book of Dialogues on Aspirations and Duties.

1897: Bernard Berenson’s accusation against VL and Kit’s Beauty and Ugliness. The quarrel lasted for 25 years, but was settled by Mary Berenson.

2 October 1904: death of little Persis, who strikingly looked like her aunt. VL and Eugene estranged: “I am grateful for your kind words. But had you given her a single smile or penny toy while she was alive, it would have been more to the purpose…” Eugene Lee-Hamilton, letter quoted in P. Gunn, op. cit., p. 164.

1904: Hortus Vitae: Essays on the Gardening of Life.

1906: Sister Benvenuta and the Christ Child.

1908: The Sentimental Traveller: Notes on Places.

1912: Vital Lies: Studies of Some Varieties of Recent Obscurantism.

1913: The Beautiful: An Introduction to Psychological Aesthetics.

1914: The Tower of Mirrors: and Other Essays on the Spirit of Places.

1915: writes The Ballet of Nations, a Present-Day Morality. Dedicated to Romain Rolland. Published in 1920 as Satan the Waster: A Philosophical War Trilogy.

1923: The Handling of Words: and Other Studies in Literary Psychology.

20 September 1924 : VL awarded Honorary Degree of Doctor of Letters by the University of Durham.

1925: Proteus, or the Future of Intelligence.

13 February 1935: death of V. Lee. Cremated and buried in the Agli Allori Cemetery.

This site uses Akismet to reduce spam. Learn how your comment data is processed.